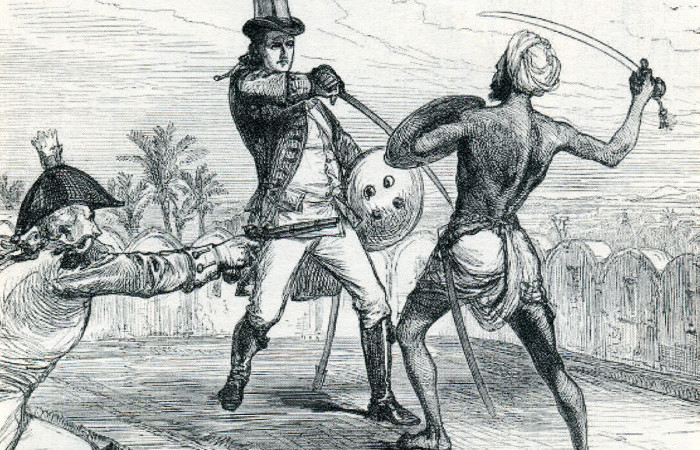 Real techniques on a battle field

Owing to a great deal of recollections and memoirs left by British officers about their participation in Anglo-Indian wars we can get to a certain extent a real idea what happened on a battle field with the use and domination of cold steel. 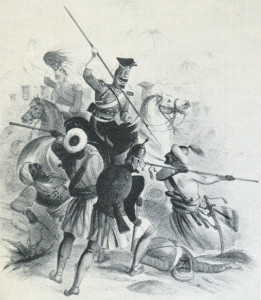 First it’s important to point out that the outcome of a battle depended on a chance, good luck or good fortune in the vast majority of cases. The one who won was just a bit luckier at a definite moment, but not stronger or better trained. There were some absolutely real circumstances to make this factor of good fortune prevail, which will be mentioned below. 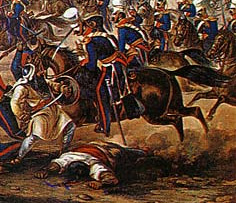 Fencing skills honed by the Europeans in practice halls often remained irrelevant, as in equestrian fights, for example, the horseman was not always the main target. Wounding and injuring horses with cold steel was a usual practice like cutting elephants’ legs with sword-khanda in earlier times. Another trick that helped to get the same result, namely to make the horseman a better target, was cutting the reins. The last one was widespread among foot Indian warriors. Because of this or maybe not, English cavalrymen considered infantrymen, even single infantrymen, more dangerous enemies than horsemen. 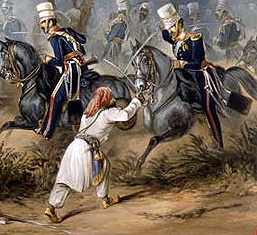 To illustrate the written above, including the necessity of good luck and fortune, can be a case when a brilliant English officer, when noticed a single Indian foot warrior, separated from the others and decided to deal with the “villain” (the epithet that was often used in descriptions written right after the events) alone. After the first unsuccessful swoop the reins of the horse were cut and the horse started spinning round thus giving the horseman no opportunity to make another attack. Then the Indian warrior cut the officer on his thigh (also a very widespread trick) and ran away. Consequently, the femoral artery was badly damaged, so the officer died with no opportunity to apply his fencing skills.

Another English officer witnessed a scene when five British dragoons were spinning around an Indian infantryman but he defended himself from their attacks very successfully and even managed to tease them. 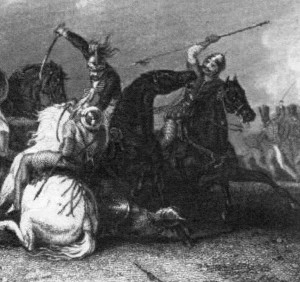 English military men respected the Indian cavalry and considered that they looked better in a battle than the English cavalry. Of course, it’s important to take into consideration that the Anglo-Indian wars were before the existence of secure systems for revolvers and differed a lot as only cold steel was used in battles. As for the superiority of the Indian cavalry over the English one can also mention the fact that the Indians handled horses better. They could handle horses without reins, which explains the numerous iconography and descriptions that depict Indian horsemen fighting with a sword and a shield (or two swords) without holding the reins. 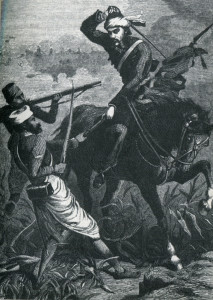 The following description of an Indian horseman tactics can illustrate a non-standard attitude to cavalry fight. Directing the horses at the charging rank of the British cavalry at the moment of the combat contact the Indians leant over to the horse’s neck and were not afraid to take a sword blow on their shields, that were often behind the back and protected it during the battle. The head was protected by the turban, under which there often was a metal helmet, but usually a turban alone was enough for the protection. By letting the enemy go past they gave a horizontal blow onto his back sometimes cutting the enemy in halves as well as the combat gear at the same time.

As for fencing itself it’s worth pointing out that it seldom came down to the exchange of blows, parry or counter-attacks, which are actually considered to represent fencing. The outcome of the fight was oftener reached by the first and the only blow both in a foot and horse battle. In case of a prolonged exchange of blows it was the European fencers who had the advantage according to the statistics of the described cases. But it’s necessary to pay attention to two things here. First, we don’t have any descriptions of fights left by victorious Indian warriors or British soldiers who lost the battle, and it’s quite clear why. Second, the technique of thrusts, used by Europeans in the overwhelming majority of cases,

was not always effective even in the case of the enemy’s defeat. Thrusts (like revolver bullets of that time) didn’t have a due stopping effect compared with chopped wounds. Moreover, Indians had a superstitious idea that as long as the weapon was in the wound they would stay alive. Anyway, it’s quite common to come across some descriptions when an Indian wounded by a thrust paid little attention to that, or even grabbed and held the weapon that had thrusted into his body and was able to inflict a fatal wound on his opponent. 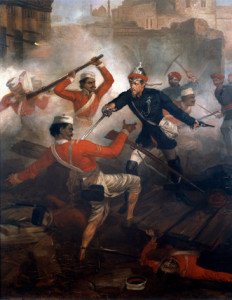 But the most significant factor leveling any individual advantages was a mass, group battle where these fights took place. In the vast majority of described cases the outcome of a fight depended on someone else, who cut, thrusted or shot their fellow soldier’s opponent. In such a situation it’s impossible to speak about superiority of one of the opponents or about the fencing system in general. However, we can speak about presence or lack of certain means in this or that system, which would somehow let resist attacks of several enemies or, at least have minimal chances to do that. 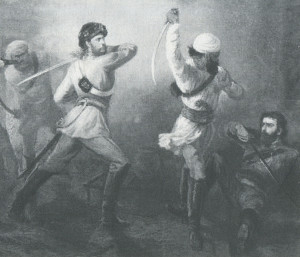 In descriptions of battles you can come across episodes that may seem odd at first sight, which didn’t surprise English soldiers, but at the same time were not ascribed to exotic or savage characteristics of Indian warriors. Thus we can assume that it was a usual, practical and easily explained thing. That was formulated in the following way. When approaching the opponent and during the fight an Indian warrior started to move in an odd way, “dance in Indian manner”, move in circles, dance around and so on. There are even more detailed descriptions like that: an Indian moved around, first, he attacked from the right, then, like lightning, moved around to the left and attacked from the left side. With no opportunity to see what these “dances in Indian manner” looked like on the battlefield, there’s only one way to imagine that, which is to pay attention to techniques similar to some degree to those in the surviving practices. It’s possible that what is meant here is that style of movements, which is the basic movement skill called “pentra” in the military practices of Rajasthan. It lets warriors move fast, with perfect coordination and random technical actions with the weapon, in circle, in any direction, without slackening the pace. The ability to move in this way gives not only an advantage over a static opponent, but also lets defend oneself from a sudden attack of a second, third opponent and some others too. At least it gives some chances for defense, otherwise, the warrior standing in one place is absolutely vulnerable from outside as his attention is concentrated on his opponent. This opinion is confirmed by the system of military practices of control over space when moving around, that exists in Rajasthan, and also by the tradition of imitating the fight against many opponents, when formal complexes are done. Consequently, we can presume that “Indian dances”, described by English military men, and the technique of movements in this system have the common root at the minimum.