Currently, there are widespread «folk» military practices in North, West and East India; each region traditionally considers them local and purely native. However, that was not always the case.

Those regions, unlike South India, underwent significant social and cultural changes regularly. It is safe to say that it was a melting pot where different traditions were mixed: inviable were sifted and the most practical and usefull remained. Due to these circumstances, at the moment it is impossible to determine which military practices have autochthonal Indian origin, which were brought by late invaders, and which arose as a result of different traditions combination. 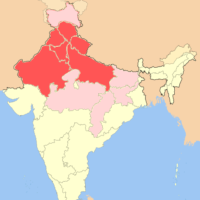 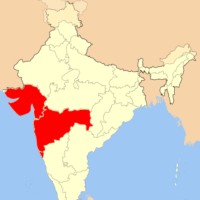 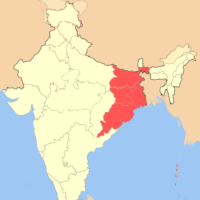 In order to clarify this question, first of all it should be realized that there is no direct connection between modern practices and ancient martial arts of Vedic or Classical period of India. Historically this connection could be traced not earlier than up to the Indian Middle Ages. Appeal to classical Sanskrit texts and Kshatriya caste may be of interest only in order to popularize historical knowledge on Indian culture in general. Time gap and, above all, those social and cultural changes, that region came through during the centuries-old period, unlike South India, make it impossible to suggest any continuity.

Trend of division into urban (palace) and rural (communal) traditions in a few studies did not go any further due to the absence of both relevant specialized research and materials itself. Existing unilateralism in descriptions due to the nature of the basic written sources, leads to the description of Indian military practices as purely elite practices of Mughals or Deccan Sultanates. Although there is no doubt that the role and influence of the Turkic and Persian culture should not be underestimated, but this is the same unilateral point of view as to treat these practices as native Indian, connected directly to the Vedic tradition. 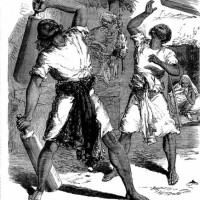 Let’s try to address this point through the lens of these two extreme points of view.

Turks invasion of India coincides with the renaissance of Iranian culture and spread of the Persian language. Persian cultural influence spreads throughout the Muslim world. Conquerors of India have already been Persian culture-bearers. In addition to the above, Muslims, unlike other conquerors, did not dissolve in the conquered country but brought their state and military arrangement, way of life, culture and social relations. Traditionally high mobility of Indo-Persian region population should be added as well. Considering all these factors, India had already formed all the prerequisites for the perception of Persian culture in all areas of life by the time of Mughal invasion.

Cultures interaction was not one-sided and imperative. Adoption of many phenomena of Persian culture was due to substitution of similar Indian ones or compromise, as in case of Urdu language, which organically combined Indian dialects and Persian language. In case of autochthonous Indian phenomena, substituted by the introduced Persian ones, the latter began to be perceived as native Indian over time, precisely because of likeness and even similarity of those phenomena. It is conceivable that in some cases there was a substitution of only name or term because of domination of literary Persian language and extant texts. 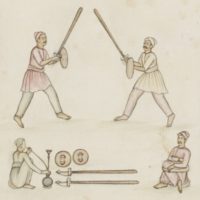 The main branch, most well documented in written sources, is practices, dated back to the traditions of Indian aristocracy of Turkic descent. In addition to the above, it is important that the martial arts, which were patronized by Akbar, mostly correspond to the practices spread in the Muslim Sultanates of the Deccan. In Lucknow library there were numerous texts on archery, fencing with a stick, a staff and a sword and others of Persian origin.

Accordingly it would be not quite correct to call those practices purely «Persian», as they certainly were influenced by the Indian environment. For example, treatise on swords “Risalah-e-shamshir shanasi” by Nusrat al-Iah Khan, compiled in 1706, contains Indian terminology.

Those practices were widely spread in the period of the Mughal Empire. That line was of aristocratic nature due to the fact that that art was studied even by the highest officials of the state or they patronized the best fighters directly. Jahangir, the fourth ruler of the Mughal dynasty, in his memoirs repeatedly pointed to his interest and patronage to the leading wrestlers and fencers, from whom he took lessons. 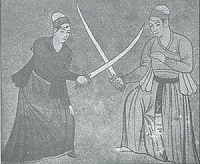 The illustration from the treatise on fencing. Ahmadnagar, 16th century

Burhan Nizam Shah I (1510-1553-2005), being the Prince of the Ahmednagar Sultanate, was personally fascinated by military practices and put a lot of time into those classes. It is quite natural that it gave rise to numerous followers and imitators and led to the fact that in in each quarter of Ahmadnagar there were schools of martial arts, number of which was equal if not exceed the number of madrasas. Over time, the palace gathered crowds of fencers on swords every day to demonstrate their art in jousts. One or two persons were killed per day. For that reason the duels at the court were forbidden and swordmasters moved outside the city to find out whose skill was better. Initially that practice was recognized as legitimate; the murder in the duel was considered honest and did not entail any consequences. The next step was squabble and murders in the city streets, arising from ordinary arguments. 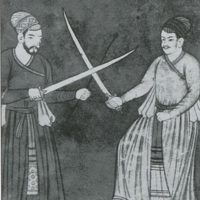 The illustration from the treatise on fencing. Ahmadnagar, 16th century

This phenomenon spread beyond Ahmadnagar and squabble as duels related to aristocratic quarters as well, including philosophers and theologians. And if someone could not stand up for themselves in such a duel, it was judged as lack of spirit and courage.

Famous fencers and wrestlers traveled around India, offering their services as coaches at the courts, and they preferred not to take students from the commons. Their target audience were aristocrats and, first of all, their sons, whose upbringing went in two traditional directions of «pen and sword». Masters were also involved in military instruction and trainings. The Mughal army did not pay much attention to the tactical interaction of the units on the battlefield. But a lot of time was put into physical trainings and individual different weapons skill. 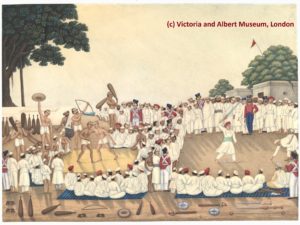 Mughal practices can be distinguished both by technical differences and by the prevailing Persian language terminology. It is highly unlikely that the practices, which were patronized independently in Delhi Sultanate, at the court of Akbar and Muslim sultanates of Deccan, had Dravidian, Rajput or Maratha origin. In the early period of Delhi Sultanate «varzish» (Persian term meaning exercises) was practiced in the force; daily exercises, wrestling and fencing were a part of it.

The fact that those practices were a part of Army military training played an important role, and in the end such kind of practice become deeply adopted in the soldier’s and, therefore, in the peasant environment. The practices existed in colonial troops of the British Army up to the late 19th century as sports entertainment for soldiers. As time has gone on, combat practices came to an end after methods of war and thus preparation for it were changed. In the soldier’s environment they gradually degraded to the level of sports games, and in the folk environment, where melee skills were in demand for a long time, remained as a modified type.

In addition, it should be considered that physical training in the Mughal army in its turn was necessarily mixed with the pure Indian folk practices brought into the army by recruits. 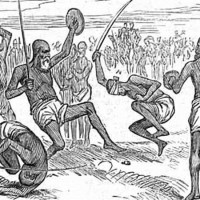 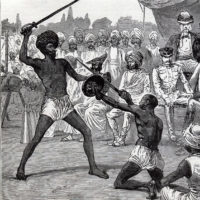 Unfortunately, now we know only about sports exercises of those practices, besides getting through the soldier’s entertainment of the late 19th century when those practices no longer played a role in individual training of the warrior.
Also real practices were eliminated by the English administration after the Sepoy Mutiny, and later they were adversely affected by general decline of interest in national martial traditions. However, at the end of the 19th century English officer Robert Stephenson Smyth Baden-Powell caught three schools of fencing in Meerut and gave a high rating to skills being practiced.

The second branch of the practices, existed in North, West and East India, can be separated from the conditionally «Mughal» tradition on the following features. First, pole-staff skill was backbone, which fencing practices are derived from. It is a surviving part of the All-Indian heritage, which is also traced in practices of Tamil and perhaps Dravidian origin. Second, the basic terminology is Hindi. The most common name of those practices is «kasrat», meaning “an exercise” or “practice” in Hindi. Indian proverb «kar ba kasrat hai» — «practice makes (master) perfect» delivers the meaning of this word best. Those practices existed in Akhara schools, where ascetics and later community militias were traditionally trained.

It was Ascetics, practicing their own methods of military training, having centuries-old practice of mercenarism if not armed banditry, who preserved traditional practices until latest time. It is notable that Maratha were the first to hire ascetics for military service, but their services as military mercenaries were the most in-demand in Rajasthan until the 19th century. Existing along with the civilian population and combining spiritual practices with military training, they were the creators of those traditions and their bearers.

Nevertheless, this branch can not be termed purely Indian for the following reasons. First, to date it is impossible to localize it by territorial or ethnic origin. The population of that regions of India was unprecedentedly paramilitary. After agrarian season was over or in drought seasons peasants drew income from military mercenary service. They were already trained soldiers in terms of individual military training. Swordplay training and military skills in general, began from an early age. In addition to the above, for example, Rajputs had no restrictions for girls and women; almost every village had its own Akhara school. According to the descriptions, in the early 19th century men of that region did not leave the village without a sword, a shield, a bow and arrows, if having a horse it was a long spear and a saddle axe in addition. In the middle of 19th century during Sepoy Mutiny they worked in fields with a shield behind a back and a sword on a side. The high degree of paramilitaryity common to the region, especially of Rajputs, Jats, Gujarats and Maratha, as well as the high mobility of the population, make it possible to state only the existence of popular military practices other than those of South India, or court (palace) practices of Mughal or Deccan Sultanates courts. Second, this branch had certainly experienced influence of the practices that existed in the Sultanates of Deccan, the main population of which were Maratha, as well as Mughal and, respectively, Persian influence, encapsulating kushti-wrestling (which substituted similar Indian practices) and a number of sepoy soldiers practices. The latter was inevitable factor, taking into account the mercenary service of the population of the regions in the Mughal, the East India Company and the British Indian armies.

Even in Maratha military camps, which, according to some data, played a key role in the spreading of the «folk» tradition, there were practiced clearly the above «Mughal» exercises of Iranian origin. 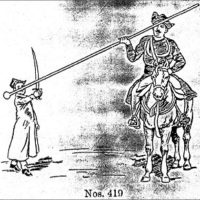 Another significant factor, which makes it difficult to differentiate any martial arts styles in the region, was the attempt to revive those practices as a unified national physical culture in the 19th century, without any deep analysis and research of their origin and their further existing in this new merged and modified form.

Thus, prior to new information or rigorous historical research, actual national military practices in North, West and East India should be assessed given the following circumstances: