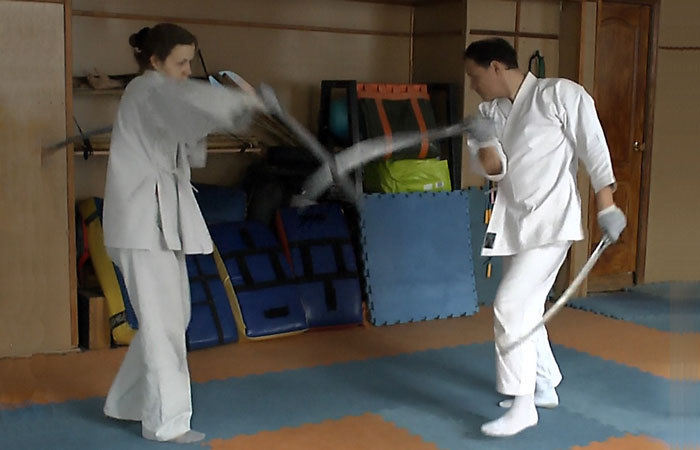 After training with the staff, it is hard enough to use Indian saber in any other manner which is different from traditional. The design of Tulwar handle by itself eliminates any errors perfectly because it forcibly fixes hand.

In simple words, the technique of Indian saber could be described as follows: hand is fixed and is able to move only together with the wrist; the blade is positioned so that it forms an angle with the wrist which is close to the right angle; elbow is fixed and straightens to the end only in exceptional cases. Again in simple words, the movement looks like a circular spinning of the bent at the elbow arm in the shoulder joint.

As it was already said, in case of Indian technique it doesn’t matter which subject is in the hands. The focus is not on the subject, but on the wrists of the hands. That is, if you remove the saber from the hands of the trainee, then only the reduction of the amplitude will cause the change of the movements’ type, but in general all the attacks and defenses will remain the same only with weaponless hands.

The above-described circular spinning of the bent at the elbow arm in the shoulder joint causes the specific type of strike with Tulwar — chop-and-cutting strike.

Only the shield is used for defense in the basic version. With development of the skills, the defense with the shield is not only a passive facing of strikes anymore, but it turns into attacking moving towards which is similar to the defending moving during weaponless technique.

Defense with the saber is allowed only as an accompanying movement or to confuse the trajectory of the attacking saber of the enemy with the back side of your saber, and only in case of an emergency – to strike with the blade side of the saber.

But anyway the basic defense technique is an escape from attack. Defenses with the shield and the saber are just an extra insurance. Unfortunately, without skill of moving, which is properly posed by means of pentra, the escapes easily turn into random bouncing and jumping.

Initial exercises to develop the technique of moving with Tulwar are exercises with a partner, simulating attacking and defensive actions, as well as synchronized moving (along the line or in pentra).

© Traditional military practices in North India | 2019 All right reserved . Copying materials is possible only with the permission of the author.