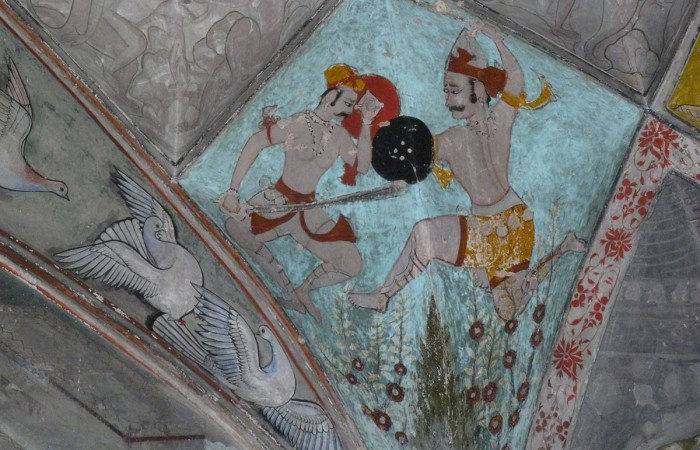 The system of military skills in South-West Rajasthan

The first thing that draws attention is exercises with a short spear. According to researchers Rajputs preferred foot fighting with a sabre tulwar, a sword khanda and a short spear as the main offensive arms. 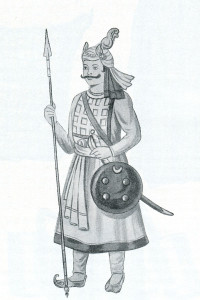 That did not exclude the use of other types of weapons (including firearms with time) and equestrian fight, it’s only about traditions and preferences. 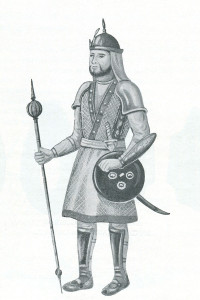 The techniques with a spear are a quite simple and an instinctively understandable set of exercises that is acquired in exercises with a pole as the basis for them. Despite the prevailing number of thrusts there are also chopping techniques. This can be explained by two factors: the use of chopping blows spear blade (wide and sturdy spearheads allowed to do so) and used combined weapon by mercenary Rajputs in the Mughal Army in the 17th century: the weapon had a staff, a spearhead and a spear butt, but the spearhead was integrated with a large club. 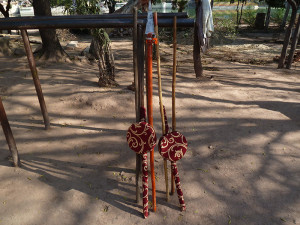 But the most common kinds of spears corresponded with the classical design. The short spear for a foot battle differed in only a wider point and a rather thick, often bamboo staff. The name of this kind of spear (that is used in the system in question) is “ballam” – it looks similar to the spears of Rajputs in historical descriptions.

Existence of techniques with a spear, to be exact, the simplicity and the natural character of its elements lets us assume that it used to be really necessary to teach the beginner soldiers basic battlefield skills in this region of Rajasthan, what was still undoubtedly useful in a military community “akhara” and in a village Rajpur school in the 19th century and earlier.

The basic training in methods of weapon application based on the skills of handling a stick is the general principle for all combat systems of India and Iran. The system in question is not an exception, where the skills of applying a stick are the basis for the whole further training. At the same time not the use of the stick itself as a weapon is of much value, but that number of movements that are necessary in the process of teaching the handling this object. It may seem strange but the movement basis of this system looks like an accentuated in some way human step or a stride which includes the general for all north-western systems basic principle of moving “pentra”. In this system the teaching method, using of this principle, leads to certain movement skills with no appeal to any sacred meanings or miraculous characteristics. When the skill is acquired the “pentra” itself continues existing only as the initial movement when performing standard forms. 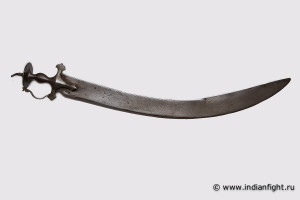 After acquiring the main two skills, namely, the movement skills and well-developed wrists in the process of training with a stick, the pupil has no more questions about the strange design of the handle of the classical Indian sabre called “tulwar”.

Excluding the possibility of holding the handle not very tight and let the weapon turn round in the hand, the handle of the “tulwar” makes it possible to apply other principles of applying long blade cold steel. These principles can be easily traced in the example of weapon handling techniques with the cross hold of the handle, which number and variety are extraordinary in India. At the same time it’s worth emphasizing that the same principles are applied when handling blade arms with a common longitudinal design of the handle.

The use of a shield, a parrying weapon or a second sword in the left hand doesn’t change the idea and is optional. At the same time it’s necessary to note that dual wielding swords warriors were very valuable in India. The Rajput also considered that a person, who could learn to handle a sword with his right and left hands equally well, had more advantages in a fight. The skill of handling two swords at a time was not just a theoretical or exceptionally training approach.

Short blade weapons include Indian daggers with a common longitudinal design of the handle (khanjar, khanjarli, jambiya, chilanum, jamadhar katari , bichwa) and a dagger with a transverse handle “katar”. The special feature of the daggers with a common construction of the handle is that it’s necessary to hold them with a reverse grip. The ways to use this weapon include independent offensive techniques as well as secondary defensive or parrying for the second hand. 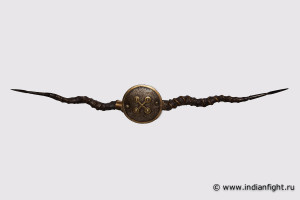 The second group, conventionally referred to short blade weapons, includes weapons mostly used for parrying (counter) and meant for the second hand (madu, maru, shield with spikes and blades, sainti of all types). 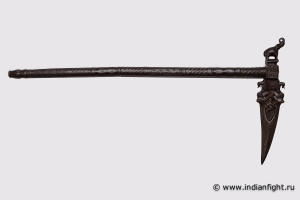 The system does not study separately such popular with the Rajput kinds of weapons as maces, axes and pointed axes. But, as noted above, the correctly trained movement skill allows to move without thinking freely, attacking and defending with any weapon as well as without any at all. As to the practice without any weapons at all, it’s enough to say, that the formed skill of the trained wrist, that holds a weapon at the time of the attack or defense, lets use the wrist itself efficiently as an independent weapon. And the skill of movement and stepping will allow to add the free leg to the general offensive or defensive actions.