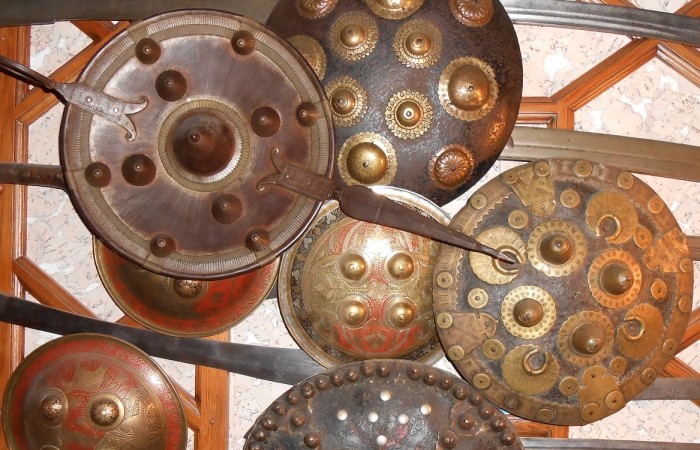 The shield was an integral part of Indian weapons culture due to the wide spread of missile weapons up to the 19th century. Even in times of domination on the battlefield firearms, the Indians, armed with swords, continued to use the shield.

Indian shields can be divided into two groups: large shields with a diameter up to 60 cm (similar “targe”) and small fists shields with a diameter of 20-30 cm (similar “buckler”).
The shields belonging to the first group, was used very widely and they can be found in the descriptions and depictions of battle scenes. Any special frills in their usage cannot be noted, moreover, very often they were taken after the back for passively defend.
The shields of the second group are more often used in training fencing than in the actual fights. That is why the technique of their use is the most developed and interesting.
Fist shield of small size, unlike large shield is used actively. That is, the hand holding the shield takes a direct active participation in all actions, both attacking and defensive. In this case, as in all other techniques, attacking and defensive actions do not exist in isolation from each other. One is always part of another, or its continuation. Attacking action may become defensive and vice versa, depending on the specific requirements of the moment.
All basic techniques of hands and movements (steps) are the same for any weapon and even unarmed combat. For the hand holding the shield, the trajectory of motion and accents are exactly the same as in the case of the hand holding the dagger (in the case of combat on the daggers) or free hand (in the case of unarmed combat). In fact, the action of this shield is short, knocking an opponent’s strike with the trajectory. As with all other techniques, the movies of the shield are taken simultaneously with the body movement, step and to transfer the body weight on the other leg.
In any case, fist shield should not take an opponent’s strike passively and directly. Without protective gloves (protective gloves, and armor in general were the privilege of the few) the wrist will be quickly damaged and a shock-absorbing cushion between the fist and the shield will not save in the case of multiple repeated shocks.

Only in the initial training the the action of the shield are alternated with the action of swords for each other. A separate, independent action by shield (if it is not a deliberate feint) is an error, providing the enemy further opportunities for more dangerous attacks.
Correct, coordinated action a shield and tulwar, which should be almost simultaneous, it is possible to describe in musical terms the one-beat and off-beat: if the defender wasn’t prepared and the action of the shield spontaneously became a major protective effect (on-beat), immediately followed by the action of the tulwar will be, in fact, wave away motion — insures to prevent repeat attack of enemy action (off-beat):

or, on the contrary, if the defender was expecting the attack and his actions serve only shield insurance movement (off-beat), and are rather only preparing for the attack, the subsequent sabre strike will be intentional attack to defeat (on-beat):

The using of the shield does not negate the possibility of parrying by a tulwar, if it is more convenient at a particular moment. In principle, actions with a shield and a tulwar nearly identical to actions with two tulwars simultaneously. That is why advanced technique with fist shield mastered after mastering the techniques of two tulwars.